I spent several of my formative years in the City of Soft-Pretzel-y-Love.  Not the fancy, cheese-filled mall variety, or the bake-at-home frozen blandness, but the soft, chewy, salty Philadelphia Pretzel, preferably from a germ-laden street vendor's cart and drizzled, of course, with mustard.  Nothing ever tastes as good as memory makes it, so for over thirty years I have been making do.

Enter Facebook.  Bear with me here, it's a convoluted story.

It all began, for me, when Janet joined Facebook.  I no longer remember what brought her, reluctantly, to that point, but she had so much fun re-connecting with old friends that she persuaded me to join as well.  The connecting-with-old-friends bit only works if one's friends are also on Facebook, which is much less likely for folks of my age, but nonetheless I've made a few enjoyable connections.  As a whole I find the Facebook package more annoying than not, but can put up with it for the few gems it tosses my way.

Like the inspiration for this post.  This summer I met a friend of my son-in-law-to-be.  Enjoyable as our time together was, we are far apart both generationally and geographically, and in the old days the chances of her sharing a recipe with me would have been nil.  But she is on Facebook, and graciously accepted my "friend request," the result of which is that when she posted a video on pretzel-making, I found it.  There are actually two in the series:

It is a very good thing we do not have cable television.  Put me in front of a food channel and I might not move all day.  Other shows by this guy are proving a major temptation getting in the way of progress this week.  "This guy" is Alton Brown, and his show, Good Eats, is on the Food Network (whatever that is).  Some related links:  One set of shows on YouTube, another set of shows on YouTube, and the fan page.  (I spent a fair amount of time trying to determine the legality or lack thereof of having the shows posted on YouTube, without success, but they've been there for quite awhile without being removed, and one of the posters runs the fan site and knows the chef, so I'm feeling free to enjoy them unless convinced otherwise.)

After all the preliminaries...ta da!  What I Did Yesterday:  I made the pretzels!  It was easy!  Dark brown, shiny, chewy, and exceedingly delicious, with or without mustard. 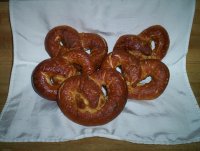 Did I say they were good?  I mean really, really good.  Even without the umibacillus vendorophilus.

Hm! What fun! I love soft pretzels, and I agree, pretzels without salt (as they sometimes sell them here in Switzerland) are some baker's idea of a cruel joke.