A Lovely Respite from Politics 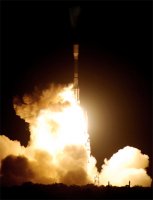 Driving home late last night we were treated to an unusual privilege:  seeing a Delta II rocket—this one carrying NASA's Kepler satellite—soar into space.  At first I thought it was an airplane...but at such an odd angle...and the color of the light wasn't right....  Then Porter remarked that it looked more like a rocket, and I remembered the Kepler launch.  Soon the flaming tail became obvious, and we delighted in the sight until it turned; the rocket must then have been moving directly away from us, as we were able to follow the bright glow until it winked out.

The beauty and wonder never gets old.