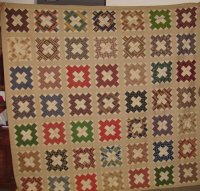 The project that consumed my life since mid-January has now reached—not completion, but a stopping point.  Deadlines can be a blessing.

This particular deadline was the Haddam Neck Congregational Church Annual Quilt Show, coming this Saturday, April 9.  Phoebe’s Quilt will be exhibited there, meaning the real thing, not my book about the signers of this Friendship Quilt.  Fortunately, the quilt owner gave me plenty of notice, because when she asked for a few copies of the book to have at the show, I knew I couldn’t simply print them off.

The first edition of Phoebe’s Quilt had bumped up against its own deadline, which was Christmas 2009.  I hadn’t thought much about it since, but the knowledge of what had been left undone would not let me rest until I had completed a revised version for the quilt show.

Amazingly, much of what is in the second edition could not have been done two years ago, even without the Christmas deadline.  Many of the new facts became available online only in the last few months; even as I was buttoning up the revision more data was appearing, making a third edition inevitable.

Don’t hold your breath.  I’m quite happy with Version 2 for now, willing to scale back the work for a while (and return to normal life) and see what new information will appear in the next few months.  I’m hoping the quilt exhibition will bring to light people with knowledge of the of the quilt signers’ families, people who could provide not only missing facts but also stories of the signers’ lives.

For a mere $30 you can have your own copy of Phoebe’s Quilt.  I know, I know.  That’s why people who publish genealogies don’t make any money.  If you buy a copy at the show, you’ll get the special show price of $25.  At that price, I lose money—but maybe I’ll gain some information.

Or, you can have a PDF version of Phoebe’s Quilt for free.  I make much use of paid genealogy websites, and I don’t think those companies need to apologize for charging for the services they provide.  But I also benefit greatly from genealogical information that is available free of charge, the result of uncounted hours and untold effort on the part of those whose only reward is the value of the work itself.  Hence my desire to make the genealogical information in the book freely available.

If you would like a PDF of Phoebe’s Quilt, e-mail me and let me know why you are interested.  I love to hear about other people’s research!  I’ll be delighted to send you the document, asking in return that you not share the file with others, but instead direct those who are interested here, where they can obtain their own copes.

And if you live within a reasonable distance of Middletown, Connecticut, I hope you’ll take the opportunity to see Phoebe’s lovely quilt, in person.  Here is the show information, taken from QuiltQua.  (Note:  Phoebe’s Quilt will only be shown on Saturday, and if you want to be sure to see it, arrive early, as it may leave before closing.)

The following is a list of genealogically important names from my quilt research, solely for the edification of search engines, so that other researchers may find their way here.

Congratulations on finishing this edition! I'm interested in the pdf version, so I can admire your work. (:

The quilt, the book, and the show were a success! Many people were interested, some cried, and one even pointed to a square and exclaimed, "That's my great-great-grandmother!" My enthusiastic sister-in-law sold all but one of the books, gave out many of my cards, and had so much fun she'll be exhibiting Phoebe's Quilt again when the First Congregational Church of Haddam has its own quilt show in December. That is the church to which many of the quilt signers belonged, so I'm hoping for an even better response from the people there.

If I start now, I can work gradually and easily toward having the third edition done by then. :)

Now's the time to plan how you're going to get there "gradually and easily"! Just 15 minutes a day or maybe add it to die-roll work - after you've taken a (short) break, of course! Congratulations!

I'm sorry to have to close off comments for this post, but the spam comments have gotten out of control. Anyone who is interested can still contact us through the link in the upper right hand corner, under "Welcome!"


Posted by Linda Wightman on Sunday, December 16, 2012 at 7:22 am
Trackbacks
Phoebe's Quilt in the News
Excerpt: It's not the New York Times, or even the Hartfort Courant, but I'll thank the East Haddam-Haddam Patch for their article on the quilt show, and their mention of Phoebe's Quilt.  (H/T PJS)  As is true with most newspaper articles I've known t...
Weblog: Lift Up Your Hearts!
Date: April 20, 2011, 7:00 am

Phoebe's Quilt Wordle
Excerpt: I created a Wordle picture of all the surnames I have associated with the people who made Phoebe's Quilt:  maiden and married names, names of parents, spouses, and spouses' parents.  (Click on the image for a larger view.)...
Weblog: Lift Up Your Hearts!
Date: April 16, 2011, 10:27 pm