A Cool Kickstarter Project That Doesn't Need My Support

I've backed a few Kickstarter projects in my time, at the intersection of an interesting concept, a person or cause I'd like to support, and an affordable price. That's how my beloved Green Ember books began, though they've since moved on to more standard publishing.

That's not a one-way street. Brandon Sanderson—my eldest grandson's favorite author, whose books are prized by several others in our family, including me—has a current Kickstarter project going, even though he's multi, multi-published in the ordinary way.

But I don't think I'll be backing this one.

First, the lowest tier of support is $40, which is not exorbitant considering you get four e-books at that level, and $10 is a pretty standard price for his books on Kindle. But I can easily wait for a sale. I'm a fan, but nowhere near a FAN fan.

More importantly, Sanderson hardly needs my support. Even after deciding not to back the project, I've been checking in occasionally on the Kickstarter page for the amusement of watching the numbers climb. When I was a young child, I loved to watch the numbers grow on the gas pump as the tank filled, and I always rooted for a new record high. My parents didn't quite share my enthusiasm.

Sanderson's project is now the number one Kickstarter project of all time, and that by a huge margin.

I thought a million dollars was an ambitious goal, but apparently it had reached ten million before the first day was over.

Eighteen days into the campaign, I captured the following screenshot: 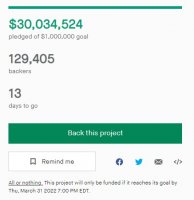 It will be much higher by the time I hit, "Publish." The pace has slowed a bit, but you can still watch the numbers grow in real time, even if it's now more of a 1950's gas pump pace than 2022.

How's that for an author most of you have never heard of?