Apparently California's governor, Gavin Newsom, is running a television ad directed at Floridians, urging us to move to California, "where we still believe in freedom."

More power to him.

I don't watch enough television to have actually seen the ad, and a brief online search revealed no lack of people wanting to tell me about the ad, but none that would show the ad in its entirety. So I can't adequately judge it.

Still, I can say that he's welcome to fish for new Californians here. Florida is being flooded with people emigrating from other states—including California—and I think we can afford to let a few people go the other way. Especially people who believe that California is more free than Florida.

You see, we happen to feel exactly the opposite. Based on all I know about other states, and what I've heard from friends and family across the country, Florida deserves it's designation as "one of the free states." I cannot say the same about California.

Much depends on what one believes makes the people of a state free, of course. New Hampshire—the "Live Free or Die" state—has a good claim based on many of the qualities that we think makes Florida free. My Texan friends will say the same for their state, and they have a long history on their side. I love the state of New York, but it has changed so much since we lived there I don't think I could go back; still, I imagine many of its citizens feel free in ways they would not in Florida. We have family members who absolutely adore living in California, and no doubt feel free enough, though I myself would a thousand times rather move even to New York than there. Connecticut has one of the best homeschooling laws in the country, which for me is one of the most important freedoms there is—yet I find it tyrannical in other ways.

Which is, or at least ought to be, Newsom's point: If Florida's idea of freedom conflicts with your own, you might be a better fit in California.

We are the United States of America. As important as it is to be the UNITED States, it is equally important to be the United STATES. We are not the same from coast to coast, nor should we be. Our diversity may be the source of some of our problems, but it is also the source of much of our strength—and of our freedom. It is the power of the Tenth Amendment: The powers not delegated to the United States by the Constitution, nor prohibited by it to the States, are reserved to the States respectively, or to the people. A citizen who finds that the culture of Florida does not conform sufficiently to his idea of what it means to be free is welcome to look for more congenial neighbors in California. And vice versa. In much of the world, you'd have to leave your country—or fight a war—to accomplish that.

This brings me to what may be the most important freedom of all, one that the last two years have significantly endangered: economic freedom. Not because it matters more than the higher freedoms, but because it supports them.

A democracy, or in our case a constitutional republic, may be the best government for promoting freedom, but it still can leave nearly half the population at the mercy of the whims of the other half. The tyranny of the majority. That's why, if a government really wants to support the freedom of its citizens, it will promote economic freedom and opportunity. A man who can easily change one job for another, one location for another, one school for another, one doctor for another, one search engine for another—such a man is hard to enslave.

The cynic in me suspects that this is why government policies tend to hurt small, independent businesses, and why monopolistic corporations, which can't regulate them to death, prefer to kill them quietly by buying them out. G. K. Chesterton wisely said that our problem is not too many capitalists, but too few.

The front of this t-shirt supports our own governor, Ron DeSantis, who to my mind deserves a lot of credit for helping Florida remain free during the past few years—economically as well as in our everyday lives. I took this picture of the back because I smile every time I see it. I love Florida; I want it to remain the free state that it is, and I wish many more states enjoyed our freedoms. 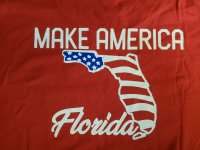 But I don't really agree with the sentiment; I don't want to make all of America like Florida—and not just because of our summer heat. I want Florida to be Florida, and Texas, Texas, and New Hampshire, New Hampshire, and California, California—only more so. I hate the ever-increasing expansion of the Federal government's reach, trying to make all states alike. Even more, I hate the homogenization of culture fueled by such institutions as Hollywood, academia, the powerful news media, and the boardrooms of large corporations.

Viva America! Long live every one of our quirky, individualistic states! Viva freedom!