Maybe this post should be "readjustments," since I'm now home and experiencing reverse culture shock, but it's still worth talking about transportation.

Basel is a city, albeit one of the nicest cities I know.  It's the third largest in Switzerland, a little smaller in population than Providence, Rhode Island or Tallahassee, Florida, but a lot more dense.  I'm not fond of cities, in general, but if you wanted to design a situation that is perfect for public transit, walking, and biking, you could hardly do better—and Basel made a conscious choice, back in the 1970's, to encourage those modes of transport. 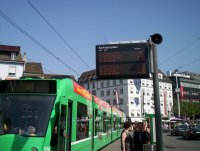 Trams and buses   The best I've ever experienced.  Clean, quiet, frequent, dependable, on time.  You can count on the schedule—for a tram to be late by three minutes is shocking—and at most times, if you miss a tram, there's another coming in just a few minutes.  I love their innovative approach to ticketing, too.  You must have a ticket—which you can buy and punch at the tram stop if you don't have a pass—but don't expect someone to collect it.  You simply hop on the tram or bus, ride it to your destination, and hop off.  (I only wish you could by your ticket on the tram.  It's frustrating to miss your ride because you're still fighting with the ticket machine.)

Do some people ride without buying a ticket?  Sure.  But the penalty, if you're caught, is stiff enough to encourage good behavior.  Rarely—but you never know when—the tram police (in plain clothes, so you get no warning) block all the exits and ask to see everyone's tickets.  If you don't have one, the fine is 80 francs (about $80), and it goes to 100 francs if you don't pay right then and there.  The system works because it is consistently enforced—and not sabotaged by lawsuits, which is what I suspect would happen in this country. 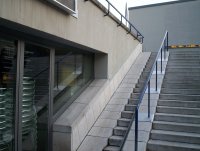 Biking  Trams are great, especially in inclement weather or if you're carrying bulky packages, but they're not as fast as biking from A to B.  Bikers are everywhere, and are accommodated with ramps like the one to the left, and plenty of parking places.  This is one reason backpacks are so popular.  One of my favorite memories is of a nattily-attired man biking along in a business suit, with proper tie—and bright orange backpack.  In the U.S., bikes and backpacks for anything other than recreational purposes are too often associated with children—or losers who have had their drivers licenses revoked.  Switzerland wins this one big time in my book.

(That said, the only way businessmen could reasonably bike to work here in Florida would be if their place of employment provided showers—and in that case, they wouldn't be wearing their suits.)

Bikers are second only to trams and pedestrians when it comes to right-of-way on the road, and drivers are much more aware of their presence than in America.  Still, I wish more of them would wear helmets.  (Kudos to our son-in-law for setting a good example.)

Walking  I walked nearly everywhere I wanted to go in Basel during my visit:  to the grocery store(s), the post office, the train station, the organic farm delivery stop, school, church, the park, and a lot more.  I thought I was getting a lot of exercise tramping all over the city, but a few calculations showed the shocking truth.  Walking distances from home to:

By contrast, back in Florida, it takes 0.8 miles just to get out of our neighborhood, which is nothing fancy at all, I would say a pretty average middle class neighborhood with comparatively small lots.  We also live in a city, though a small one—the population is a quarter that of Basel.  Walking distances from our house to:

Claraplatz seems far away from Janet's home, because it's clear on the other side of the city.  Office Max I consider very close, "just down the street."  Yet they are the same distance.  Blows my mind.  The effect is probably because I go by Office Max more often by car than on foot.

What really makes walking nice in Basel is the traffic lights.  First of all, if there is no light, a pedestrian in any crosswalk has the right of way over anything except a tram.  (That doesn't mean it isn't sometimes necessary to stare down the approaching cars, and it's always important to look before stepping into the intersection, as non-resident drivers do not always know they are expected to stop if they see you at the curb.)  If there is a light, the pedestrian must stop, but the great thing is that the wait is always short.  The cycles are designed to keep pedestrian traffic flowing, unlike the walk lights here, at which a five-minute wait is not unheard of.

Car sharing  By car is not the nicest way to get around Basel—parking is a big problem, for one thing—but there are times when you need one.  For this you can take advantage of a car sharing system, sort of like a short-term rental.  It works quite well, at least if you don't mind driving a stick.

I'd love to import Basel's transit system here, but—as I keep telling European friends who think the only reason the U.S. doesn't have such a system is that we're all a bunch of lazy SUV-lovers—it's not that simple.  What I think could and should be imported is the farsightedness and strength of will that made Basel decide, some 35 years ago, to turn away from the more cars / more and bigger roads transit model, and commit to a cleaner and friendlier path.

I see that Google Reader picked this up before I completed some updates, so those of you reading through a feedreader might want to click through to the real site instead.

So true. We can't implement an exact replica of the European solutions because we just don't have the population density, but there is a lot we could do!
I am very frustrated with our city for example; council has been fighting for 25 years over the cost of a rapid transit system. The cost goes up and up as they argue and argue. If they had built it 25 years ago, it would have paid for itself several times over by now!

Are the trams paid for entirely by the fares? A friend who worked on mass transportation in Pittsburgh mentioned offhandedly one time that public transporation always loses money and so is heavily subsidized to make it work.

Pittsburgh's T and bus system, which isn't too bad, I think - not up to bigger city standards, but most people find it reliable enough for commuting purposes, etc. But, I know they get a lot of state funding, as they occasionally have big pushes for writing your representatives when the funding is potentially being cut, etc.

I don't know about city transport, but I do know that the trains make money on passenger traffic in Switzerland. Cargo doesn't, but it's subsidized for environmental reasons.

Orlando, too, has been fighting over light rail for years, though it looks as if it might finally happen. There's the good old NIMBY problem, and liability issues, and trying to balance the needs of residents vs. needs of tourists. Not to mention politics. What I'd like to see is an improvement over a bus system that requires me to allocate three hours for a trip to the airport, one that takes only 45 minutes by car. (The walk to the bus stop is 30 minutes each way, and the bus makes many stops on its way to the airport.)

I remember hearing that Washington, D.C.'s Metro system only works because it is subsidized, but I'm no longer sure of statements like that, because they rarely take into account how much car and truck transit is subsidized by the highway system. I'm certain a workable public transit system would have to be heavily subsidized at first, because of the need to break through people's negative feelings towards it. It needs to be clean, attractive, safe, frequent, and fast to attract enough riders to make it pay. It won't ever amount to much until the people on the bus are not just those with no other options. Most of my fellow passengers have been fine, but the loud, profane, drunk, smelly, and just plain crazy people do not encourage people to leave the more controlled environment of their cars. Sure, I've run into such folk in Boston and New York, but there are usually enough other people around to minimize altercations. Orlando needs more "other people."

The Swiss government put 2.7 billion francs into the SBB last year (http://www.wirtschaft.ch/SBB+Gewinn+von+fast+370+Millionen+Franken/436527/detail.htm). The result: a profit of 370 millions. What I've always heard is that public transport needs subsidies because that's the only way it can compete with cars, and that cars are only that cheap because the price we pay for petrol doesn't reflect the true costs of running a car (e.g. increased costs for housing because parking takes up valuable space, oil runoff into waterways, the occasional Exxon Valdez oil spill, foreign wars, pollution).