What We Did for Independence Day

There's nothing like a small-town Independence Day parade, and when we're not attending weddings or births or other such out-of-town occasions, the Geneva (Florida) parade is where we like to be.  That's because we're privileged to march with the Greater Geneva Grande Award Marching Band, the parade's star attraction.  (Well, we think so.  Some of the other participants may disagree.)

I've written about the band and the parade before; this year we actually had a whole article about us in a real newspaper, albeit one i'd never heard of until the photographer introduced himself to ask my name.  No, the paper did not choose to run the photo of me, no matter how crazed I must have looked crashing the cymbals.  Instead they very appropriately featured Geneva's own Richard Simonton:  good man, good friend, and the one who makes the band happen (and gets us our free hot dogs).

They're the Greater Geneva Grande Award Marching Band, and they make hundreds of parade spectators smile.

Simonton said the band has roots that go back to The World's Worst Marching Band, which was part of Disney back in the 1980s and then was private in the 1990s.

The marching band conductor, Tony Peugh, gives the band much of its levity, Simonton said.

"He's kind of a showman who gets attention going down the street; he's a character," he said. "His nickname is Stinky so we call him Maestro Stinky Peugh, which I think suits the band very well."

"Whoever is behind us can get annoyed because we stop a lot and disrupt the parade a little bit," he said. "Stinky will pick someone out of the spectators and we will play 'Happy Birthday,' each in a different key, and then about halfway through the parade we stop for a union break, that always gets people laughing.

It's always a wonderful time, especially reuniting with friends from the WWMB days.  We even have a few (very few) serious moments, such as playing the Star-Spangled Banner, as mentioned in the article.  Our arrangement is by Greg Barker, who played trumpet in the WWMB and was Heather's former trumpet teacher.  No other arrangement of our national anthem moves me like Greg's.  You can get sort of an idea of it here, although this version is synthesized and I really think even our <ahem> decidedly unprofessional rendition is nicer.  You have to imagine the trumpet solo at the beginning; it just doesn't work all artificial flavors and colors.  But it's incredible live.

So here's to Richard, who makes it possible; to Tony, who makes it funny; to Gunga Dad, who keeps us, in Richard's words, "relentlessly hydrated"; to Chaz, the Fearless Leader, to Greg D., who taught me to work the crowd, to ... I'm going to stop naming names now, because I'm sure to leave off someone important ... to band friends old and new ... oh, and one more:  to thirteen-year-old Heather, who read about the World's Worst Marching Band in the newspaper, set her face determinedly to join, and dragged the whole family along with her.  Thanks, all!

The Gang (click to enlarge) (photo credits The Mighty Kara) 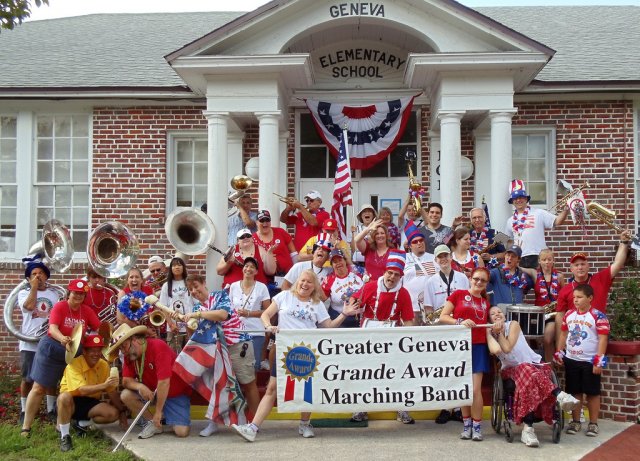 Gunga Dad and the Water Wagon: What I Want to Be When I Grow Up 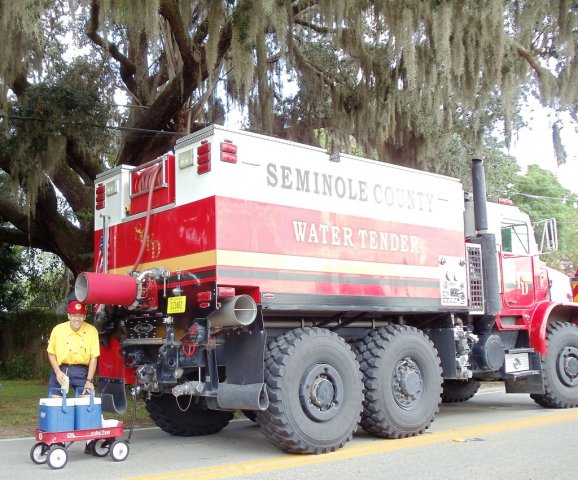 And speaking of pretensions:  Who needs a music degree when you can have the shirt? 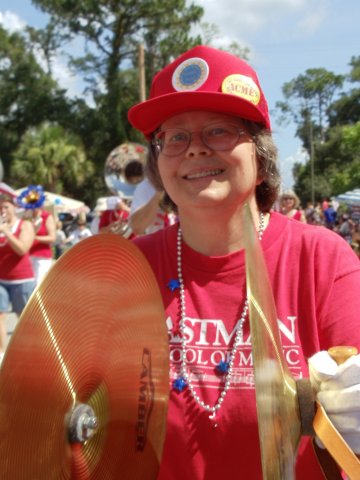 Wonderful! But with one flaw: you didn't publish that great picture of the cymbal player.

Thanks, Richard. One of the privileges of being the publisher is that I get to choose the pictures. :) But looking at it again, it is a good photo, as pictures of me go (all credit to the photographer), and the irony of the shirt is too much to pass up, so I've added it.

Glad you still have fun with the band! That must count for something according to those longevity people . . .

Indeed it does. Exercise (I'm used to walking, but cymbal work is hard on the arms), camaraderie, social connections, productive and enjoyable work. All good stuff.

Good thing, too: we have many young people (some second generation!) but some of us are noticeably older than in the WWMB days.