I wasn't planning to read another of O'Reilly's Killing series so soon after Kennedy and Reagan.  But while writing that review it hit me that there would be no more appropriate time to read Killing Jesus than during Holy Week. I began on Good Friday and finished on Easter Sunday.

I'd been hesitating over this one, the subject being far dearer to my heart than any of our presidents. Plus, I knew the work was bound to be somewhat speculative, and therefore somewhat inaccurate, the source documents not being as plentiful as those O'Reilly and Dugard have had to work with for their other books.  But as with the others in this series, I was pleasantly surprised.

It is clearly a secular book, as I expected.  The authors' efforts are historical, not theological.  I don't believe there's anything to cause an atheist, Muslim, or other non-Christian to cringe.

No, I take that back.  There are some very cringe-worthy moments (for anyone) such as in the descriptions of just what the common and well-honed practices of torture and punishment did to the human body, mind, and spirit, and the stories of debaucheries and perversions—especially of the Roman emperor Tiberius—that are not all that graphic but certainly make me wish my imagination were a little less vivid.  But none theological.

If the sources for this book were not as easily accessible as YouTube videos of presidential speeches, that doesn't mean it isn't well-documented.  Research—historical, archaeological, textual—and books abound about that time period, and the original records are plentiful and well-attested.

The historical record may not have been as immediately accessible as that of more recent times, but the men who wrote the history of that period were very much concerned with getting their facts straight and telling the story as completely as possible.  The Romans were very keen to chronicle their times. (p. 276)

The authors appear to have done an admirable job of crafting the historical records into a smooth and coherent narrative, beginning as far back as 44 B.C. with the assassination of Julius Caesar.  Because it is a craft, there is of necessity some speculation, and surely some error, in filling the gaps and reconciling differing accounts.  For example, they posit not one but two separate cleansings of the temple in Jerusalem, which may be true but is not a theory I'd heard before.  They also perpetrate the idea that Mary Magdalene was a prostitute, which stems from an error about 1400 years old and only recently corrected.  Nonetheless, Killing Jesus does a much better job of making the life and death and times of Jesus come alive, while remaining true to the facts, than any other book or movie I've experienced.  Christian versions tend to be cloying and feel unreal—it is abominably difficult to portray holiness!—and secular versions tend to give the impression that the authors believe the only way to get at the historical truth is to debunk anything specifically Christian about it.  O'Reilly and Dugard walk that line very well.

You won't find any theology in Killing Jesus, nor for that matter any clear statement of how Christianity makes sense of the narrative.  They suggest C. S. Lewis' Mere Christianity for that; the recommendation is hidden away in the "Sources" appendix.  Without the theology, their analysis of Jesus' purpose, his message, and his thoughts as he approaches his death comes across as rather lame, but I commend them for recognizing—contrary to a sermon I once heard—that he was not caught off guard by the events but knew what was going to happen and why.

Side note 1:  Can I just say that reading the about events in Rome, and looking at the maps, have ten- or maybe a hundred-fold more meaning for me since our visit to that city last September?  Travel, or at least many travel videos, ought to be a part of everyone's education from early on.

Side note 2:  In the Afterward, a "where are they now?" look at the principal players, the authors mention our favorite Swiss mountain, Pilatus, because it was named after Pontius Pilate. 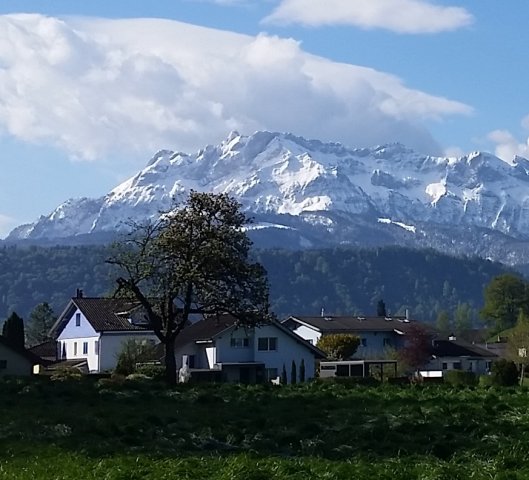