This is the post I started to write five months ago, but postponed to make sure everyone involved got through their quarantines and other impedimenta successfully.

I like to think that we've been more careful than most during this pandemic, though more due to the concern of our children (who apparently think we are "old") than our own. But when you're retired, and introverted, and not easily bored, staying home is a pretty easy option. We wore masks before our county made them mandatory, shopped only for what we deemed necessities, and used the stores' "senior hours" when we could. I'm also the only person I know who consistently washed (or quarantined) whatever we brought home.

But all that isolation, particularly the lack of physical touch, is hard even on introverts.

Hardest of all was cancelling our big family reunion scheduled for April 2020—coinciding with what was supposed to be the first visit home in six years of our Swiss family. Following close behind were missing our nephew's wedding, our normal summertime visit to the Northeast, and our long tradition of a huge family-and-friends Thanksgiving week of feasting and fun, all of which would have involved being with most of our American-based family. Plus the breaking my fourteen-year streak of travelling overseas to visit our expat daughter and her family (one year to Japan, thirteen to Switzerland).`

I know that doesn't begin to compare with the hardship endured by those who were forceably separated from loved ones who were sick or dying. But when the "temporary measures to keep our hospitals from being overwhelmed" turned into unending months of restrictions—with our hospitals so far from overcrowded as to be financially strapped due to underutilization—even normally compliant people like us began to chafe.

Even as we relaxed and let go of much of our fear, we remained vigilant in our precautions, for a very good reason: a light, not at the end of the tunnel, but a much-needed illumination in the middle of the tunnel. We needed to stay healthy, because...

The reunion remained off the table, due to onerous quarantine requirements imposed by the states the rest of our family live in. But thanks to much work on their part, and a state government more enlightened than most, our European family was able to visit us in December. Rarely have I been so happy to be living in Florida, which welcomed them with open arms. So of course did we! Mind you, I think the CDC was still recommending we wear masks all the time with visitors and stay six feet apart, but naturally that didn't last six seconds! A year apart from family is far too long, and that goes tenfold for grandchildren. Sometimes you just do what you have to do.

We did the risk/benefit analysis—and made the joyful choice.

Porter had to drive to Miami to pick them up, because so many flights had been cancelled. But he would have driven farther than that to bring them home!

We had been prepared to stay mostly around the house, just enjoying each other's presence. And at first we did a lot of that, since merely being in America was adventure enough for the grandkids. But they were here for a month, and most of the tourist attractions had reopened, albeit at reduced capacity, so we took full advantage.

Kennedy Space Center was amazing. We were not the only visitors in the park, but at times it seemed like it. Sadly, some of the attractions were still COVID-closed, but there was certainly plenty to see. The following photo is for the lefties in our family:

One of the trips I enjoyed the most was to Blue Spring State Park, which was visited by more manatees than we've ever seen naturally in one place. The weather was perfect—that is, cold. Cold weather drives the manatees from the ocean and the rivers into the relatively warm water (about 72 degrees) of the springs. The air temperature made most of us keep our masks on even though that was not required except inside the buildings, since we discovered them to be very effective nose-warmers. 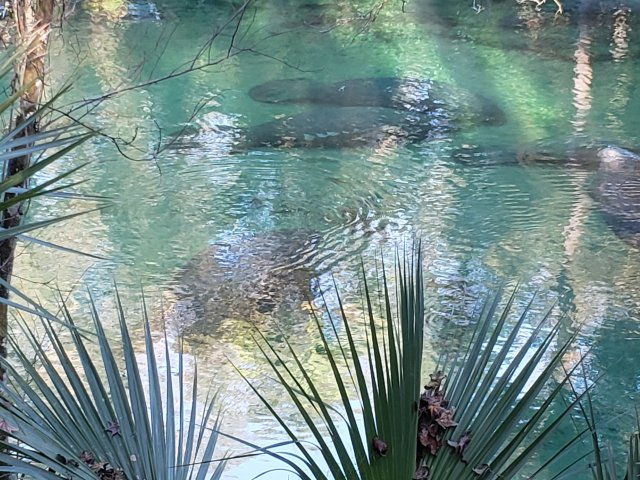 Another favorite activity was swimming. (Not with the manatees; that's no longer allowed.) The intent was for most of it to be in our own pool, and indeed it was, but there had been a glitch: We purchased a pool heater, knowing that our pool temperatures in December can dip into the 50's (Fahrenheit). However, the unit that was supposed to have been installed before our guests arrived was delayed again and again. Whether it was actually the fault of the pandemic is anyone's guess, but that's what took the blame. It finally arrived just a few days before they had to return to Switzerland. Until then, the children swam bravely, if not at length, in the cold water, and all of us enjoyed the (somewhat) heated pool at our local recreation center. And then they really appreciated our own heated pool for those last few days.