Not long after we moved to here, we planted a couple of blueberry bushes in the backyard.  As with many of our Florida gardening ventures, this one could not have been called a rousing success.  Or perhaps it could, in a relative sense, simply on the grounds that the bushes are still alive.  But they never seemed to bear more than a handful of berries each year, and the birds always got to most of those before we did.

This year, however, was different.  I have no idea why; but look at all the berries on this branch!  (Click on the picture for a larger view.) 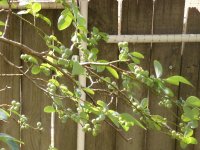 So Porter decided it was about time we stopped ceding the crop to the birds, and built this: 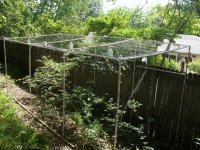 Was he more clever than the birds?  We'll let you know when the berries ripen.

Hey, nice! I hope there will still be some when we visit this summer! Where's the door?

Actually, both the ends open up. They're each made of two overlapping panels of netting. We're still working on the best way of holding them closed—easy for us to get past, but not for critters.

Sorry, though—I'm afraid summer is the wrong season for blueberries in Florida. On the other hand, they should be plentiful in Connecticut.

(I just noticed that I forgot the promised update.) The crop was all we could have hoped for, and more. We had weeks of delicious berries—and believe me, fresh-picked berries are infinitely more delicious than what can be bought in the grocery store!

Unfortunately, this year's crop is much less promising. Whether due to the much-needed pruning Porter did, or to some other factor, the bushes now appear to be taking a year off. :( That's sad, especially since the might have been ripe in time for our expected visitors. On the other hand, a year dedicated to growth might prepare the bushes for better years in the future.