It's hard being a long-distance grandmother, whether the distance is 1000 miles or 4800.  Certainly I'd rather our grandchildren live just down the street!  But one compensation for the loss of frequent interaction is the joy of seeing how much the children change between visits.  As we await the time when I'll have baby news to announce, I'll share a few stories of life with Joseph, 18 months old and soon to assume the important role of big brother.

John Ciardi said that a child should be allowed to learn, "at the rate determined by her own happy hunger."  Joseph's current "happy hunger" is for letters and numbers.  He  has a wooden puzzle of the upper case alphabet that is the first toy he takes out in the morning, and again after his nap.  This was supplemented at Christmas by the nicest number puzzle I've seen, which includes the numbers from 0 through 20 and arithmetic operators as well. 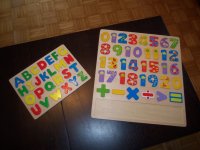 First, he toddles over to the shelf for his alphabet, and then—because it is more difficult to reach—points to the number puzzle and commands, "Hum!" ["Numbers!"]  After naming the numbers and letters to himself and/or asking for them to be named, taking them out of the puzzle frame, putting them back in, and yes, throwing them with glee across the room—he is a little boy—he will get paper and a pencil and ask for various numbers and letters to be written, often adding his own scribbles, which, of course, look nothing like the models—yet.

Not only does he know the pieces, and where they go, but he's also cognizent of what's missing, and worries until it is found.  Before dinner, and again at night, we help Joseph pick up the toys.  The other day he and I were working on the number puzzle, and Stephan the alphabet.  Stephan remarked to himself, "where's the Z?", finally found it (did I mention that the pieces get thrown around the room?), and put the puzzle where it belongs without announcing his success.  After Joseph and I finished the number puzzle, he went to Stephan and asked, "Zee?", content only when shown that it was in its proper place in the puzzle.

Just this morning Janet discovered that he also knows how to count, at least to six:  she was fixing dinner (which happens at noon here, because Daddy bikes home from work to join us), and Joseph was helping by handing her potatoes to weigh.  He handed her the first one, and announced, "one."  Then the second, followed by "two."  Then "three, four, five, six."  At the seventh and last potato, he hesitated, having forgotten; seven is one of his newest number words.  Our apologies to Glenn Doman and to the Right Start Math folks, who want children to lean quantities before they learn counting, but it was his idea.  We had no idea he could do it.  Then again, maybe he knows more quantities than we think.  He loves his daddy's Dots book.

Joseph is also very good at putting the pieces in their places on the puzzle board.  I remarked that he went very quickly from the "large knob puzzles" to being able to do this much harder variety, and Janet said, "Oh, he still can't do the large knob puzzles!  He gets frustrated quickly and gives up."  Which only confirms that children will work patiently and persistently to learn what they really love!

Oh, I suppose I should mention that he's learning the letters and numbers in three languages....  I think he's more fluent with English at this point, though really, how would I know?

I'll relate two more incidents that happened this week, just to have them recorded. I didn't want to mention them in the post because they are so funny, bizarre, and probably totally coincidental. But definitely jaw-dropping at the time.

At suppertime, Janet was discussing what we would be eating, and mentioned, "Or we could have p-i-z-z-a." Immediately Joseph pointed to the refrigerator and exclaimed, "Pizza!"

In our house I think it might have been c-o-o-k-i-e.

For us, maybe i-c-e-c-r-e-a-m. We have friends whose young son took to pointing at the freezer and saying, "l-m-n-o-p."

I think it's detrimental to keep kids from learning to count, even if it is just a rote sequence at first. It helps them figure out the quantities later, if they already know the rote sequence. That's my experience from working with Noah on the Right Start Math. And guess what? He knows the quantities, now, too (still fuzzy on 6 and 9, I admit).

By the way, yesterday, Jonathan taught Noah multiplication and he was successfully doing problems such as "6x5+3"

Keep it up, Joseph! You can teach the baby multiplication, too. (:

Love these updates!! I am sure that there is a professor in that youngster just waiting to be fulfilled!
Always amazed me at what a young age Elijah truly learned how to negotiate the internet and it was NOT just the icons either we learned!

I remember that, Pami! He was amazing.

Yeah, the price is awfully high, which is why there are the two less expensive versions (though still pricey as children's books go). Believe me, they would be more reasonable if that were possible. Self-publishing, where books are printed one or just a few at a time, is really expensive. I know -- I've looked into it for some of my genealogy work. But at least it's possible to print a nice-looking book like that, and I plan to bite the bullet -- but I just have to do a little more research first.... If you don't know what I mean, ask Kenny. ;)

Go, Noah! And go, Jonathan! Joseph and I had a talk this morning about the responsibilities of older siblings. :)

Have you looked at createspace for on-demand publishing? It's a subsidiary of Amazon. I've been quite happy with the service, the quality, the price and the automatic listing on Amazon. They'll even provide the ISBN if you don't have one.

Thanks, Katie, I'll look into it. I did not know about it.

Katie, thanks, I'll also have a look into createspace. I'd much rather sell for less than $70, liz, that's for sure - but it'll have to at least match the blurb quality, which I think can survive a few kids.

For comparison, the set of dots flashcards at the Institutes also sells for $65 or in that range, and there's no short, inexpensive version. (The short version isn't hardcover, for cost reasons, but looks like suitable quality to me, provided the kids have learned how to treat a book.)