There's some debate just what Emmen is.  Stephan says it's a suburb of Luzern, and I suppose it is, Luzern being a 15-minute bus ride, or an even shorter train ride, away, which we proved today when Vivienne acquired her Swiss passport.  But it hardly has a "suburban" feel, at least as I know suburbs.  For one thing, there's decent public transportation—but that's no doubt because it's Swiss.  For another, most people live in apartments, which says "city" to me, though Janet says that is also a Swiss characteristic, city or no.  There's traffic.  There's industry.  There are plenty of stores, but no strip malls (though there is a mall or two).  Everything is close together, and what yards there are, are tiny.  Children walk to school.  Janet walks to the grocery store (actually, several grocery stores), the train station, the above-mentioned malls, the swimming pool complex, and church.  That feels like a city to me.

And yet....  Emmen certainly isn't a city like Basel, or Luzern, with a lively city center, and centuries of history and culture.  And it has a rural feel, as well.  Also within easy walking distance is a long hiking trail along the river (pedestrian, bike, and also equestrian in most places).  The trail runs through wooded areas where trees are still being harvested by loggers.

(Switzerland is a great place for hiking trails.  There's one that leads all the way into the city of Luzern; we had planned to hike it today, but the -9 degree Celsius temperature was a deterrent.   Perhaps we should have taken advantage of such balmy weather, though:  tomorrow's high is supposed to be -10, with a wind chill of -16 (that's 3 degrees Fahrenheit).

There are also several small farms nearby.  One of Joseph's favorite walks is to the see the cows and goats at the nearest dairy farm, where for a single franc we pick up a liter of fresh, delicious, raw milk.  (Click on the pictures to enlarge.) 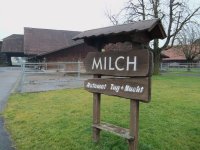 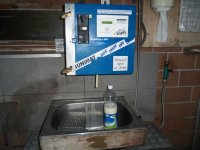 So, what is Emmen?  Whatever it is, it's like nothing in the United States that I know of.