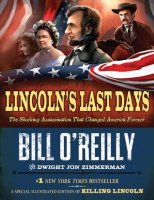 Six years is a long time to hold a debt, and I consider a gift book unread to be a debt unpaid. But my father-in-law, who so kindly gave us both of these books for Christmas 2012, is not alone among our creditors. Most Americans have credit card debt; I have bookshelf debt. These shelves in my office are only representative, by no means comprehensive. But I plow on, one book at a time.

Or in this case, two books. Lincoln's Last Days is really a much-shortened version of Killing Lincoln, with the addition of many illustrations. To me, this makes Killing Lincoln the far more interesting book. With apologies to the world's illustrators, I rarely appreciate their work. Pictures are great in their place, but to my mind their place is rarely to be cluttering up a book. They annoy me by interrupting the flow of the words, and by breeding conflict: I want to keep reading — I really ought to look at the pictures — but they always break my train of thought — if I skip the pictures can I really say I've read the whole book? — does it count if I give them a cursory glance? — ugh. I often don't even look at the illustrations in children's picture books when I read them to our grandchildren, another reason I dislike the modern trend of not including the whole story in the words alone. You can guess how I feel about those books that don't have any words at all!

But this isn't about my quirks. And I'll admit that the shortened, illustrated version was a good gateway book for me. I'm not above letting prejudice affect my actions, and I had an unreasoned, gut-level prejudice against Bill O'Reilly. I say unreasoned because I knew nothing about him, had never seen him, had never heard him except accidentally in the background. But what I had soaked in from the world around me was negative. And I had noticed that he seems to have a predilection for writing about killing people: Killing Lincoln, Killing Patton, Killing Reagan, Killing Kennedy, Killing Jesus, Killing England, etc. Which left me with a bad taste in my mouth for reading anything of his. Okay, maybe this really is about my quirks.

However, since 2009, when I wrote Finding Truth in Unexpected Places, I have encountered more examples than I can count of my (then) newly-made proverb, the wise man recognizes truth in the words of his enemies. Not that Bill O'Reilly is my enemy, but you get the idea.

Much to my surprise, I greatly enjoyed both books.

Perhaps someone who knows more about Abraham Lincoln and the Civil War would not be as impressed, but I learned a lot. What's more, the stories are well-written and gripping and I found it hard to put the books down, even though I knew how they turned out. There are a few minor annoyances, such as some of the physical descriptions, e.g. "Laura Keene steps aside. She can't help but marvel at Lincoln's upper body, still possessing the lean musculature of the young wrestler renowned for feats of strength." This, while Lincoln was dying in her presence? Was that really necessary? Not to mention the use of "can't help but," a pet peeve of mine.

There is a lot of interesting detail here, and the books appear to have been well-researched; don't expect much nuance, however. If you have any thought that the Civil War was about more than just slavery, or that Abraham Lincoln was not a saint in every possible way, Bill O'Reilly is not your man. But nuance comes best from reading many sources (or watching—Ken Burns' PBS Civil War series is excellent), and these well-told stories deserve a place in that collection. I highly recommend reading either book, but especially Killing Lincoln. It would be appropriate—and easy reading—for my two oldest grandchildren.

I notice that our local library has many of O'Reilly's other books. Despite my initial prejudices, I'm inclined to check out some of the other people he has "killed." This is another reason why the unread books on our shelves are slow to change their status.