In research inspired by my previous post, Measles Wipes Out the Immune System?, I discovered this interesting article on another disease, polio. Most of all I was struck by this explanation of the huge spike in the disease that occurred in the middle of the 20th century:

Up to the 19th century, populations experienced only relatively small [polio] outbreaks. This changed around the beginning of the 20th century. Major epidemics occurred in Norway and Sweden around 1905 and later also in the United States. Why did we see such large outbreaks of polio only in the 20th century?

The answer ... lies with hygiene standards. As polio is transmitted via the fecal-oral route, the lack of flush toilets and the lack of safe drinking water meant that children in the past were usually exposed to the poliovirus before their first birthday already. At such a young age, children still benefit from a passive immunity that is passed on from their mothers in the form of antibodies. ... Thereby, virtually all children would contract the poliovirus at a very young age. While protected from developing the disease thanks to the maternal antibodies, their bodies would produce their own memory cells in response to the virus and that ensured long-term immunity against polio. The latter is important as the mother’s cells have a half-life of only 30 days (starting from the last day of breastfeeding). Once the maternal antibodies decrease in number, children lose their passive immunity. As hygiene standards improved, the age at which children were first exposed to the poliovirus increased and this meant that the maternal antibodies were no longer present to protect children from polio.

That improved sanitation was a driving factor in polio outbreaks is also illustrated by the fact that the age at which polio was contracted increased over time. During five US epidemics in the time period 1907-1912, most reported cases occurred in one- to five-year-olds, whereas during the 1950s the average age of contraction was 6 years with "a substantial proportion of cases occurring among teenagers and young adults." Being exposed to the poliovirus after losing the protection from maternal antibodies meant that they were more likely to get polio.

The dramatic dropoff in cases in the 1950's shows the effectiveness of the newly-developed polio vaccine. 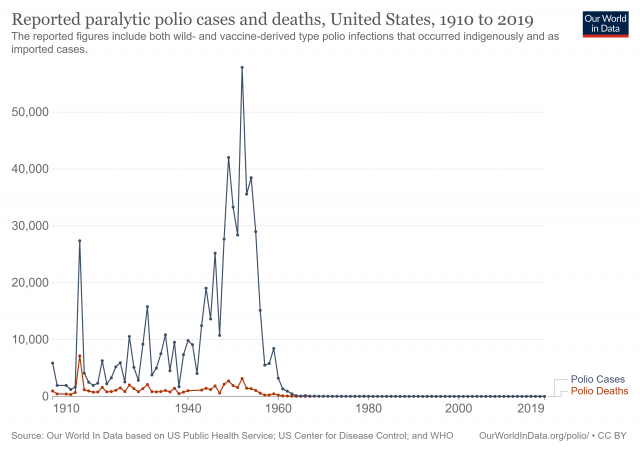 I find the progression fascinating. The world achieves a steady-state coexistence with the disease, in which mothers' acquired immunity protects their children while the children develop immunity of their own. Then, thanks in large part to laudable and desirable public health advances, the disease gets the upper hand and skyrockets. (The article does not mention this, but I'm certain that the decline of breastfeeding during this time period also contributed significantly to the disruption of the natural protection against polio.) Finally, vaccine development and widespread implementation nearly wipes out the disease.

The emphasis on "nearly" is important. There is hope that, like smallpox, polio will completely eradicated. Smallpox dropped off the list of recommended vaccines when the risk from the vaccine became greater than the risk of the disease. Someday soon I hope the polio vaccine will also be relegated to history. In the meantime, however, we must not become careless nor complacent about the vaccine. We no longer have the natural immunity passed between mothers and children, and nothing short of a catastrophe will return us to those times. We have reason to feel quite safe here in the United States, but consider this from the article:

As of 2017 the virus remains in circulation in only three countries in the world—Afghanistan, Pakistan and Nigeria.

Do we want to completely shut our doors to the visitors, immigrants, and refugees who come here from these countries? If not, we'd better continue to make vaccination against polio a priority.

As of 2017 the virus remains in circulation in only three countries in the world – Afghanistan, Pakistan and Nigeria
Posted by sursumcorda on Sunday, November 21, 2021 at 9:49 pm | Edit
Permalink | Read 254 times
Category Health: [first] [previous] [next] [newest]