I am so not ready to go back on Daylight Saving Time.  The only good part about changing the clocks is the extra hour of sleep, and that only happens in the fall.  This, however, makes the medicine go down a little easier.  (Thanks, Tim!)  (My European audience can enjoy it in three weeks.)

Another Reason to Celebrate Lent

The kitchen crew was whippin’ it up
at the Redeemer pancake dinner.
The band that was playin’ the Bluegrass tunes
was pickin’ ‘em out like a winner.
There at the back was a man in black,
who was speakin’ of Israel;
And by his side was the love of his life,
the lady that's known as Gail.

The cause of all of this merriment
was the upcoming purple season;
And so the crowd was chewin’ the fat,
as if they needed a reason.
The following day would bring ashes and grief,
forty days of a somber tone.
But tonight they wore beads and sated their needs
by carvin’ the ham to the bone.
The vicar was telling the lamest of jokes,
as the vicar is wont to do.
They say that the Anglicans know how to drink,
and they surely know how to eat too.

These are the simple facts of the case,
and I guess I ought to know.
There was food and fun, and everyone smiled,
I saw as I watched them go.
There’s a time for Lent and a time to repent,
but the season goes down so much better,
If you start it off by gorging yourself
on homemade pancakes and butter.

When he was young, my father had a two-mile walk to work, and used the time to memorize long poems, including Dan McGrew and another Service work, The Cremation of Sam McGee.  Later, upon request, he would recite them to his children and grandchildren.  That pleasure cemented my love of the poems, and it came flooding back when I read Alan's verse.  Thank you, Alan and Vivien!

Thanks, Jon, for finding this.  From where I sit (the office next door) this is enough like Porter's frequent phone meetings to have me (almost) rolling on the floor laughing.  (No, I will not say ROFL.)

I Once Was Lost but Now Am Found

From LarkNews.com, one of the best 404 File Not Found errors I've come across. 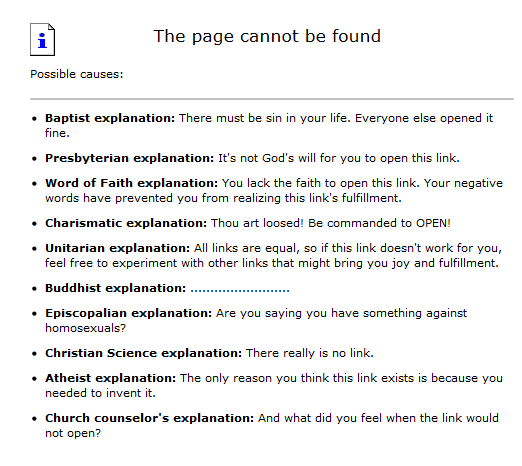 Paper Airplane? There's an App for That!

A $40 pledge gets you the basic package.  No wonder they have so many backers; I can imagine that was many a geek's Christmas present.  (H/T Stephan)

Although it's still warm in Florida, the first snow has fallen for much of our family, so I'd better post this before no one is thinking of autumn fun anymore.  I don't know if this sign was intentional or not, but when our friend RDH posted it on Facebook, I had to share it further.  I'm pretty sure it was not an attempt to give bilingual directions to the crop.

I Want One of These!

Every kid knows how wonderful it is to bounce on the bed.

I'm certain the world would be a saner and happier place if we all had access to jumping pillows. Not to mention healthier—what a fun form of exercise!

I'd rather be with family than almost anywhere, but it's a pity that we only manage to spend Independence Day with the Greater Geneval Award Marching Band about every other year.  This is what we missed two days ago.

I've written more extensively about the band before, so I won't reiterate, but if you ever want to experience the true spirit of American Independence Day, visit Geneva, Florida on July 4th.

For the läckerli-lovers in the family, and anyone hungry for a reminder of Basel:

A Boy and His Atom

This is so cool—and I'm not just saying that because it was done by IBM, even though they do put food on the table and finance trips to visit the grandkids.

I've often wondered why tolerance is considered such a high principle these days.  Granted, I have many qualities that cause those around me to exercise forbearance; nonetheless, I hope for more in even a casual relationship than mere tolerance.  I'd rate our various neighborly relationships, for example, as great, good, casual, and tolerant, with the last being better than "nasty," but nothing to brag about.

Perhaps the preaching of tolerance comes because we have failed so badly at love.  Tolerance—at best—says, "I disagree with you, but it doesn't matter."  Love says, "I disagree with you, and it does matter, but I love you, and I choose to believe the best of you.  I will pray for you, encourage you, and seek out ways to work with you that do not violate my conscience.  I will be alert to any lesson God wants to teach me through you."

Lowering the bar is not the solution.  Redefining a C as an A rarely inspires higher performance.  Besides, we're not doing so well at tolerance, either.  With a hat tip to VP via Facebook, here's a lighter moment dedicated to all who have been slammed by the unloving who preach love, or by the intolerant who preach tolerance.

It Really Was a Beautiful Day in the Neighborhood

To brighten your day, here's a brief look at Fred Rogers, of Mister Rogers' Neighborhood, by the Menopause Guy.  (Yes, I know it's really Mental Floss.  But I hear what I hear.)

You all know I'm not a sports person.  Would you believe me if I said that spending all day (more than 12 hours) at a sporting event last Saturday was an absolute blast?

The sport was Quidditch, and last weekend was Quidditch World Cup VI, held in Kissimmee, Florida.  As much fun as I had, I doubt I would have bothered to attend had not our nephew's University of Richmond team qualified for the event.  His parents came down for the occasion, and we had a great visit.  It was too short, but included a first:  conversing over dinner, just my sister, her husband, and the two of us.  It's not that we don't get together—but quiet dinnertime conversation is quite different from the usual lots of people of all ages, with lots of things going on.

For those who have not read any of the Harry Potter books, or for those who have, but are puzzled as to how the players learned to fly, here is a brief explanation of how the earthbound version of Quidditch is played.

A bald eagle stops to watch the game:  Hrmph.  Silly people, flying so low to the ground.  I'd put those hoops a lot higher.  Why didn't they ask me to play?  I can outfly the best of them!  At least they didn't charge me for this great seat.

Recently we bought a gauge for our propane tank.  I'm tired of guessing, especially during hurricane season, how much propane is left for our barbecue grill, and figured the gauge would soon pay for itself through more accurate fill-ups.  (The cost for filling a tank is the same, whether it is empty or almost full.)

Usually the odd or outrageous statements that come with a product these days are found in the Warnings section, but this was in the instructions themselves (emphasis mine):